Other than that, how was your dinner? 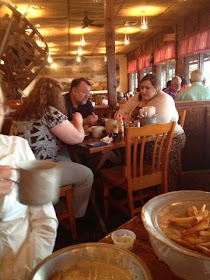 Convicted child molester, John Langworthy, was spotted today dining in a Jackson, MS restaurant with his wife and daughter. When asked by the manager as his party was leaving if their meal was satisfactory, the person who snapped the photo replied that it was fine until a convicted child molester sat down at the next table. Yes, I suppose that would sap just about anyone's appetite. The manager was reportedly "stunned and concerned" and asked if that was "the music minister from Clinton."

John was overheard discussing "prayer" and was said to be "very animated and happy-go-lucky."

Someone has speculated "this is what happens when someone doesn't have to go to jail and instead gets to all but run the community."

Oh, and I've just been informed the name of the restaurant is... taa daa... Cock of the Walk.  (You couldn't make this stuff up.)

PLEASE, if you were a victim of JL or any other abuser or have information about the abuse of someone else, regardless of how insignificant the information may seem or how long ago it may have occurred, contact the proper authorities and let them sort it out! In Clinton, that would be detective Josh Frazier at 601-924-5252.

If the abuse or suspicion of abuse occurred in Jackson, MS:

In addition to either of the two police departments listed above, to provide any information regarding known or suspected abuse in Hinds County, MS, contact Assistant D.A. Jamie McBride at 601-968-6568.

If the abuse or suspicion of abuse occurred at Prestonwood or in the Dallas area:

DCAC will act as the go-between if you do not want to contact the police directly. Don't worry about any statute of limitations. What may seem to be an insignificant detail may be the missing puzzle piece the investigators need. Go to them and tell them what you know and let them determine if it's important! They will keep your identity confidential.

Survivors Network of those Abused by Priests (S.N.A.P.) contacts:

Please refrain from using the anonymous identity as it becomes confusing distinguishing one anonymous commenter from another. Either register with Blogger (you can do this anonymously) and log in or select a unique screen name.